April 08, 2017 Post a Comment
Spark: A Space Tail (2017) - Spark (known as Spark: A Space Tail in the United States), is a 2016 3D computer-animated science fiction comedy film written and directed by Aaron Woodley, and featuring the voices of Jessica Biel, Hilary Swank, Susan Sarandon, Patrick Stewart, Jace Norman and Alan C. Peterson. The film premiered on April 22, 2016, at the Toronto Animation Arts Festival International. It is scheduled to be released on April 14, 2017 in the United States by Open Road Films. 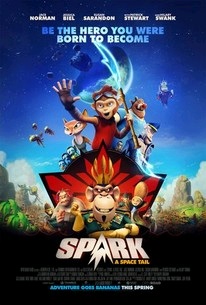 Thirteen years ago the power-mad General Zhong seized control of Planet Bana, tearing it to pieces in the process. Enter Spark and his friends, Chunk and Vix, who learn of Zhong's plan to take over the universe. If Zhong is able to harness the power of an ancient beast known as the Kraken, he'll have history's deadliest weapon at his fingertips. And it's up to Spark and his friends to stop him. An action-packed space-odyssey filled with humor and heart, SPARK is the story of a boy who embarks on an epic adventure, and in the process discovers his rightful place in the universe.