April 08, 2017 Post a Comment
How to Be a Latin Lover is an upcoming American comedy film directed by Ken Marino and written by Chris Spain and Jon Zack produced by Eugenio Derbez and Ben Odell from 3Pas Studios. The film stars Eugenio Derbez, Salma Hayek, Rob Lowe, Kristen Bell, Raphael Alejandro, Raquel Welch, and Rob Riggle. It is scheduled to be released on April 28, 2017 by Pantelion Films. 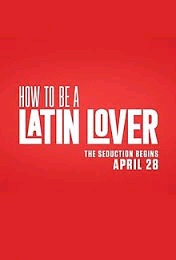 Having made a career of seducing rich older women, Maximo (Eugenio Derbez) marries a wealthy woman more than twice his age. 25 years later, spoiled and bored from waking up next to his now 80-year-old wife—he gets the surprise of his life when she ends up dumping him for a younger car salesman. Forced out of his mansion and desperate for a place to stay, he must move in with his estranged sister, Sara, (Salma Hayek) and her nerdy but adorable son, Hugo (Raphael Alejandro) in their small apartment. Anxious to return to the lap of luxury, Maximo uses his nephew’s crush on a classmate to get to his new target—her grandmother, Celeste (Raquel Welch), a widowed billionaire.

As Maximo tries to rekindle his powers as a Latin lover, he finds himself bonding with his nephew Hugo, and he begins to learn that being a Latin lover means that loving money isn’t as important as the love of your family.