April 08, 2017 Post a comment
CARS 3 (2017) - Cars 3 is an upcoming American 3D computer-animated auto racing sports comedy adventure film. It is the eighteenth film to be produced by Pixar Animation Studios and released by Walt Disney Pictures. It is the third installment in the Cars franchise and is being directed by Brian Fee, a storyboard artist on Cars (2006) and Cars 2 (2011). The film is scheduled to be released on June 16, 2017. 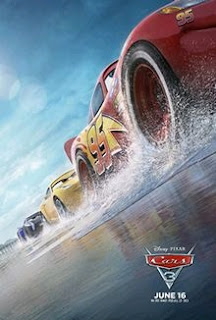 While racing against a new generation of high-tech race cars, many begin to wonder if the famous Lightning McQueen (Owen Wilson) will retire from racing after he endures a terrible crash. With help from race technician Cruz Ramirez (Cristela Alonzo) and some other friends, he begins training to attempt a comeback and defeat antagonistic rookie Jackson Storm (Armie Hammer) in the Florida 500.