November 20, 2016 Post a Comment
Passengers is an upcoming 2016 American romantic science fiction thriller film directed by Morten Tyldum and written by Jon Spaihts. The film stars Jennifer Lawrence and Chris Pratt. The film is set to be released by Columbia Pictures on December 21, 2016. 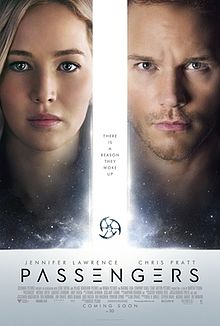 The spaceship Starship Avalon on its 120-year voyage to a distant colony planet known as "Homestead II" and transporting 5,259 people has a malfunction in two of its sleep chambers. As a result, two hibernation pods open prematurely and the two people that awake are stranded on the spaceship, still 90 years from their destination.Aurora Dunn (Jennifer Lawrence) is a journalist from New York City who is interested in cosmic travel.[8] Jim Preston (Chris Pratt) is a mechanical engineer from Denver who wants to leave Earth and bought the ticket for the journey. The two soon discover that the malfunction that caused them to be awoken prematurely is not the only problem afflicting the huge spaceship, and as they try to find a way out, they soon find themselves falling in love.