November 20, 2016 Post a Comment
Office Christmas Party is an upcoming American Christmas comedy film directed by Josh Gordon & Will Speck and written by Justin Malen and Laura Solon, based on a story by Jon Lucas and Scott Moore. The film stars Jason Bateman, Olivia Munn, T. J. Miller, Jillian Bell, Courtney B. Vance, Kate McKinnon and Jennifer Aniston and will be released on December 9, 2016 by Paramount Pictures. 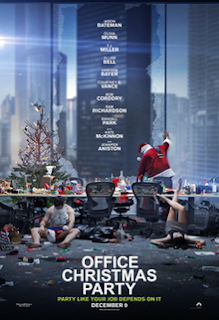 When Zenotek CEO Carol Vanstone (Jennifer Aniston) tries to close the branch of her hard-partying brother Clay (T. J. Miller), he and his Chief Technical Officer must rally their co-workers and host an epic office Christmas party in an effort to impress a potential client and close a sale that will save their jobs.